“What three words come to mind when you think of your viva?”

This question was the most challenging part of my research in to the viva to date, and also one of the most interesting. The quantitative answers that I found – explored in Tuesday’s and Wednesday’s posts – were interesting, and I think have a lot to offer people who are trying to set their expectations for the viva.

They are also a little…soul-less. Yes or No. True or False. This number or that number. Where is the feeling? Where is the emotion? The viva is not just about research, there is a real person involved. The candidate – the graduate! – is the PhD, not the research, not the thesis. If you’ve passed, what three words come to mind when you think of your viva?

Can you see any of them in the following Wordle? 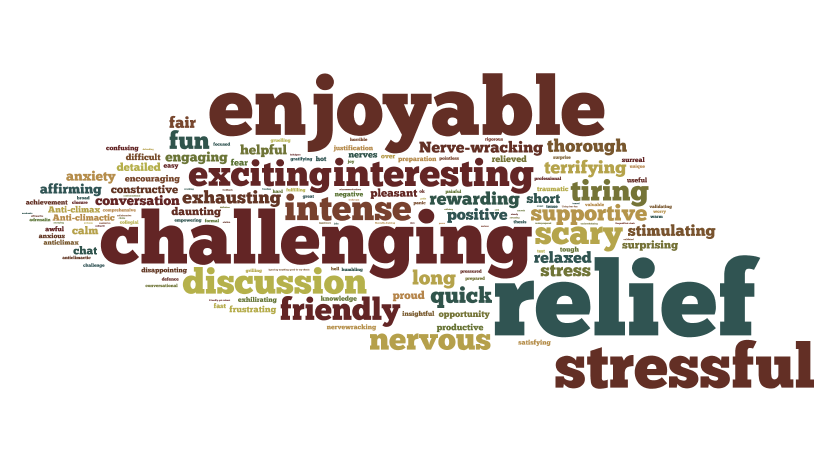 A basic Wordle showing common words expressed about the viva.

Wordles work by making common words in a set of text larger. It’s great to see that big words which stand out include enjoyable, challenging, relief – it’s to be expected I suppose that the word stressful also appears prominently. While this starts to show a soup of feelings about the viva, one might also note that there is a slight repetition in ideas: just before the word challenging there are three different spellings for the idea of “anti-climax”. While I wanted to analyse this to see percentages of people who found the viva enjoyable, or stressful, it was important to standardise some answers. So all versions of “anti-climax” were switched to “anticlimax”, and similar words (“stress” and “stressful”) were connected. An alternate version of this Wordle might appear as: 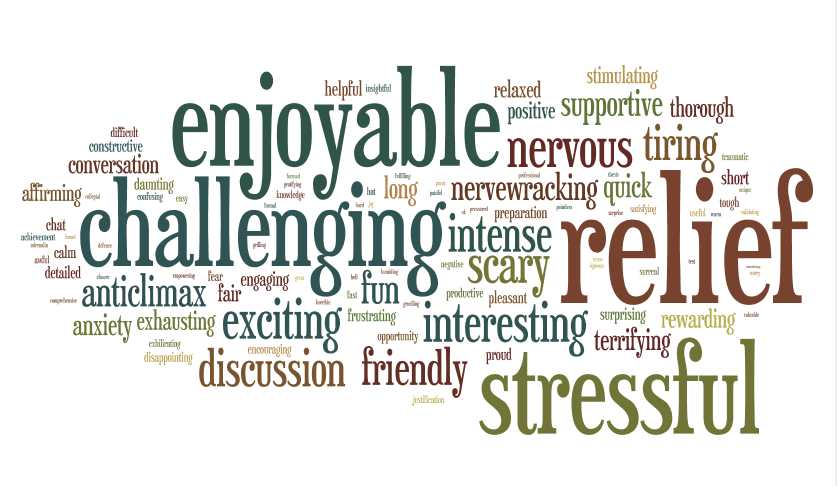 Again, we see obvious stand out words. I wanted to see how common certain feelings about the viva occurred, and the method I chose to do this was to group words together which express similar ideas (rather than combining “stress” and “stressful” to show representation). So, for example, the words “anxiety”, “nervous”, “nervewracking” and “stressful” were combined into a cluster which I labelled “Stress”.

I created similar clusters for Fear, Relief, Tiring, Discussion, Negative, Positive, Enjoyable. Now, of course, the respondents overlap into different clusters – someone who expressed a word which entered into Stress could also express another word which would be grouped under Enjoyable. And three words can only give a flavour of what people think about their viva, it does not tell the whole story. Allowing for those two factors though, I think that there are some interesting results when we compare them to the other aspects of the responses given – the length of the viva, the level of corrections, when the result was told to the candidate and also whether or not they were ASH or SCI.

What stands out? The following jumps out to me as interesting:

What do I think these results mean?

I don’t know! Well, I have some ideas, but as this post is heading towards 800 words I will stop here for today and summarise what I think my findings mean tomorrow. I have a few more results to share, and I’ll finish with some thoughts and questions. In the mean time, what do you think of these results? Are they surprising? What questions do you think might be worth asking of my data set?

Leave questions or comments on this post, or on Twitter – I’ll try to respond and update posts. In particular if you want to see any more detail about what I’ve presented then do let me know, I am trying not to bore with either masses of data or just enthusiasm and be methodical about presenting this. If you think something is missing then let me know!

"Nathan did a great job. He instructs from a position of experience and understanding. This course helps to break down barriers between students and their supervisors."
Participant, Managing the Supervisor Relationship, University of Manchester
This site uses a few essential cookies to share this website with you. We don't track you or share anything about you with third parties.OK!Read more at our privacy policy page.