How long is the average viva?

Top of my list of questions, I wanted to know how long vivas were. I added up all of the lengths and divided by the number of participants and arrived at 2 hours and 23 minutes.

So now we know.

That’s not very helpful is it? We need to know how that relates to the various lengths reported. Is this skewed by one person with a twelve hour viva? (thankfully no!) This average gives us a smile I think, but not much more. So let’s look closer: 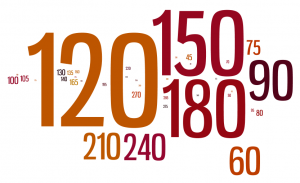 This image shows times concentrated around a range from 120 to 180 minutes. In fact, in my data:

This is good news – and I think does a lot to debunk urban legends that get circulated. This data was collected from respondents who had their viva between 1999 and 2014, but almost two thirds of the responses were from 2010/14; when the set is restricted to responses from this period the results hold more or less true, with only a slight increase in longer vivas.

What sort of pass do graduates get?

Before asking questions for this survey, the oft-repeated wisdom about viva results said that around 80% of graduates got minor corrections or no corrections, and that nearly everyone else got major corrections (which have different definitions depending on institutions).

The results of the survey say something different:

This is GOOD news. This means that over 90% of candidates are broadly achieving the standard required for their thesis – they do not need substantial changes after submission. This is great news. If PhD candidates are generally meeting the thesis and research standards required, then news of that can help nervous candidates; it also reinforces the conviction that doctoral training is having an impact – whether that comes from supervisors, researcher developers or peer groups.

When are results given?

Nearly every PhD graduate I have spoken to has told me that they found out their results at the end of the viva (typically after a short break). And every researcher developer and Graduate School staff member I have spoken to over the last four years has told me that a candidate would “normally” find out that they have passed at the end. The outliers are people who are told possibly to put them at ease, or maybe by examiners who want to get formalities out of the way.

However, the survey showed that while the majority of candidates are told at the end of the viva, 20.9% are told at the start that they have passed! Who are all of these people? More importantly, what were their theses like?

To the latter question I have no answer, but tomorrow I will shine some light on the former. While all of these results that I have shared today are accurate – in as much as that is what the data shows us – they are skewed by another factor. Tomorrow I will re-examine these results, and show the clear distinction between the Arts, Social Sciences and Humanities and the Sciences.

Thanks for reading – questions and comments below please, I will do my best to respond!

"The course is very useful for understanding what a viva will be and making it seem less scary."
Participant, Viva Survivor, University of Manchester
This site uses a few essential cookies to share this website with you. We don't track you or share anything about you with third parties.OK!Read more at our privacy policy page.