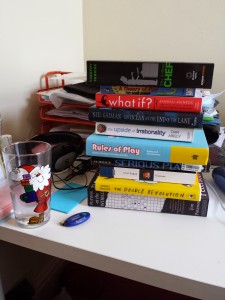 For someone who loves reading, I make a lot of excuses for not getting around to books. “I didn’t have time yet.” “My Kindle was out of power.” “I got it in print but it’s massive.”

Well no more! My plan is not to limit myself to the ten books in the photograph during 2015, but I plan to make sure that I do read these books in 2015. Here’s the books and they whys:

None of these books require charging up (the book at the top of my Kindle reading list is Fahrenheit 451, in case you’re interested). I’m making the time to read them. Admittedly one or two of them are massive and heavy, but I will make the time, and drop little updates as I go along.

I’m always interested in what people are reading: so what are you looking forward to reading this year?

"This workshop is significant as it can assist research students in mending issues that seem difficult to resolve."
Participant, Managing the Supervisor Relationship, University of Manchester
This site uses a few essential cookies to share this website with you. We don't track you or share anything about you with third parties.OK!Read more at our privacy policy page.