To Do Lists: First Experiments With Scrap Paper

Yesterday I talked about how I started using to do lists during my PhD; I mentioned how they didn’t work that well for me and why. When I started working for myself I fell back on to old habits, but earlier this year I decided to do things a bit different. I had an instinct that to do lists were helpful for my work preferences…I just needed to make them work for me.

The most useful thing that I realised – I think it was after leafing through Getting Things Done again – was that I was way too optimistic about the scope of work that I could get done. In particular, I was often too focussed on the outcome to the detriment of seeing all of the steps in a project. My to do list would have “Book 2” written on it to get me tuned in to the big outcome, when what was much more helpful was to be specific about what I needed to accomplish that day.

Obvious in hindsight, right? By being really clear about the tasks that you want to do, you’re more likely to be able to engage with them. If you put the headline down, which has fifty-seven steps to get to it, you’re unlikely to tick it off that day.

Alternatives to Ticking and Crossing

I realised that another factor which wasn’t working well was that other tasks always came up after I had laid my day out on paper. I would have to add “Reply to Richard” to the bottom of my list, but needed it to be done before the other things. So for my own little experiments in getting more done in my limited time, I decided to try a couple of things, all based on a “moveable canvas” approach.

Moveable canvas is the term I just came up with for “writing tasks on scraps of paper and laying them out.” Moveable canvas. Rolls off the tongue! In any case, I tried three variations before I settled on one that I liked. 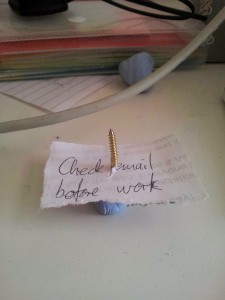 The Spike at the start of a busy day!

The Spike has been my preferred approach for having something like a to do list for some time now. I still use a regular to do list sometimes, but I love that thrill – and it is a thrill…Is that weird? – of stabbing a scrap of paper on to that nail. It’s not the end of my little experiments though; it has been useful for the day to day of getting tasks done, but tomorrow I want to share a few of my experiences related to scheduling – which for me is looking at the week/day ahead and planning when to do a task.

PS – please take a look at my Patreon campaign for the Viva Survivors Podcast!

3 comments for “To Do Lists: First Experiments With Scrap Paper”